House Rabbits Should be Seen, Not Smelled.

Probably the most common objection I’ve heard to housing rabbits indoors is the assumption that rabbits and/or their cages are smelly. Some people may have even attempted keeping a rabbit indoors and are convinced that doing so is necessarily a smelly affair. I am here to say that you can keep rabbits indoors without your home smelling!

Litter training is obviously step one and is addressed here. However, the ultimate key to being smell-free is the overall litter set up. The type of box, the type of litter/bedding , and how it is maintained are the critical factors for success. 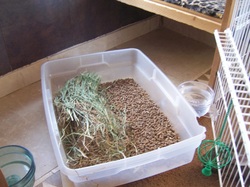 The first necessity for the ideal set up is a large litter box. Small boxes, including those corner boxes will soil more quickly, won’t hold enough hay, and will require more frequent changes. For two average rabbits, I use a roughly 16” x 23” storage box. I would use the same size for one rabbit. Skimping on litter box size will compromise the goal of being odor-free.

The second necessity is using a good litter. My litter of choice is wood pellets (not shavings). These can be wood stove pellets or pellets used for horse stalls. They should look like the ones in the photo to the left. These pellets  e x p a n d   so very little is needed. You can see in the photo how shallow is the layer of pellets I use. My second choice would be a pelleted paper litter like Yesterdays News unscented. Both types are good for odor control. Personally, I prefer the wood pellets for odor control and for price. There is no need to waste litter by layering it too thick. Compare the mid-line of the litter box in the 2 photos below. The pellets expanded from barely covering the bottom to almost reaching that mid-line. (The pelleted paper litter will need to be layered more thickly - up to 3 x as thick as the wood pellets.) 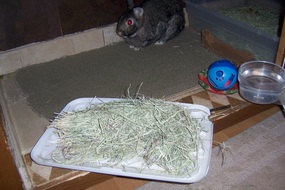 The third and equally important aspect is maintaining the litter box between cleanings. Every morning and every evening (minimally), put a bundle of hay right inside the litter box. I try to place it mostly on the one side of the box. The photo (left) shows the amount of hay used for each refresh. I use that white lid for convenience to carry the hay to the litter box. Sometimes I add hay during mid-day too.

Adding hay directly into the litter box two to three times per day accomplishes a few things. First, it ensures that your bunnies are getting fresh hay throughout the day. There is something about freshly added hay that entices bunnies to eat more. Second, it functions as a sieve that allows urine (and some poos) to seep through the hay and down to the absorbent litter below. Third, then, the hay also serves as a barrier that keeps bunny’s paws from direct contact with wet, soiled litter. Bunnies won’t eat soiled hay, so adding the fresh hay a few times a day keeps them supplied with unsoiled hay. Fourth, the hay that does get stamped down serves as extra layering that holds any urine odor down in the litter.

By maintaining the litter box with the daily additions of hay, the litter box should easily go a full 3-4 days without any noticeable odor. If you only have one rabbit, it is possible to go a full week. With practice, you will get to know the ideal number of days between cleanings. I have been able to stretch it longer at times too.
By following these suggestions of using a large litter box, a good, pelleted litter and daily additions of hay, you should be able to have a non-smelly rabbit cage. The faint scent of fresh hay should be the only possible odor. But it is rare that visitors will notice a hay scent. If they do, it is not offensive and is a far cry from an offensive urine odor.