ALWAYS, have plenty of hay on hand - all day, every day.

Hay should make up the largest portion of a rabbit's diet. It should be readily available at all times. It should be refreshed at least twice per day. Hay is the one thing that you never want to run out of. A sudden unavailability of hay could cause major digestive upset very quickly.
Bags of hay are sold in pet stores, however the price may tempt one to feed sparingly, or to wait until bunny finishes what he has before refilling. But don't be sparing. Learn to expect a certain percentage of hay to be discarded.
Many local feed stores sell hay by the bale or half-bale for much less than pet store prices. Just familiarize yourself with what type of hay (see options in header bar) is appropriate for your rabbit (based on age). A full bale of hay lasts 2 rabbits about one year. In my area, one bale of timothy costs about $24, bermuda costs about $18 -- a small price for a full year.
CAUTION!   Be sure your hay source is not from an area of RHDV outbreak.   CAUTION!
[While pellet food should not be switched suddenly, it is ok to change the type of hay offered.
Some rabbits have definite preferences for what they like, though, and some may refuse a particular type.]

Alfalfa should be avoided unless your bunny is still under 7 months of age. ​
​

How much hay should bunny eat each day ?

(note: Meadow hay is often a mix of grass hays, depending on where it is grown. Occasionally it may have some alfalfa or clover mixed in so be sure to ask.)
Hay is usually the messier component of keeping rabbits. The trick is to keep the hay reasonably contained while still allowing easy access for the rabbits. A hay rack placed over the litter box is one alternative. Most strays will end up in the litter box. Or, hay can be placed directly in the litter box. Baskets can also work, but some rabbits may hop inside a basket and possibly decide it makes a good litter box too! As always, it depends on your individual rabbit. 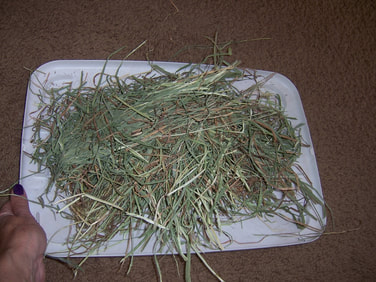 ​This picture shows how I carry hay across the room to the bunnies' litter box. It's just a plastic lid -- about 16" long x 11" wide -- from a storage container that works well because 1) it can hold more than a fistful, and 2) it prevents the hay from falling on the floor on the way across the room.
This also shows the approximate amount of hay that gets refreshed a minimum of twice per day.

Can't hay cubes be used to cut down on hay mess? 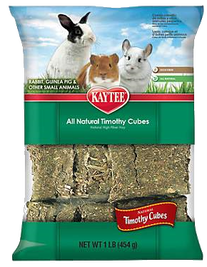 No.   Hay cubes are no substitute for actual hay.

Hay cubes are densely packed hay that bunnies nibble in a way similar to chewing on a wood chew block. That process is completely different than the chewing motion needed to consume long strands of hay. A rabbit's jaw must move in a figure 8 motion when chewing grass or strands of hay. It is this figure 8 motion that allows a bunny to properly grind down those ever-growing teeth.

Hay cubes can make great boredom busters, chewing toys or treats. Just look for a brand like Kaytee Natural that has hay as the only listed ingredient - no molasses, colorings, or preservatives. Just know that bunny still needs his usual plenty of actual hay with long strands.

Their pellet-food is mostly made of hay.  Isn't that enough?

No.  Pellet food is no substitute for long strands of actual hay.

While pellet food is made primarily of compressed hay, it does not use the same chewing motion needed to consume long strands of hay. When a rabbit chews hay, the jaw must move in a figure '8' grinding motion. It is this motion, along with the silica found in grass and grass hays, that grind down the rabbit's ever-growing teeth. This motion is not used while chewing pelleted food.

Every available pelleted rabbit feed contains more ingredients than hay only. Some of those extra ingredients provide minerals and other nutrients that are fine for rabbits in limited amounts. Too much of a good thing is not always a good thing! This why it is recommended that pellets be severely limited but hay be provided in abundance.